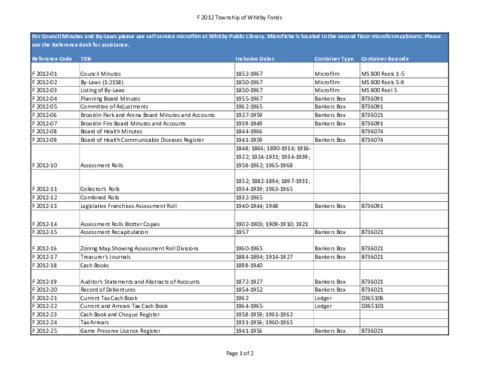 The Township of Whitby was incorporated effective January 1, 1852 under the terms of the Baldwin Act, Chapter 81, Canada Statutes, 1849. The seat of local government was the Village of Brooklin, an agricultural community consisting of several mills and other small industries. Other communities in the Township included Ashburn, Myrtle, and Myrtle Station.

These records were transferred to the Whitby Archives by the Archives of Ontario in 2016.

Council Minutes and By-laws are available on self service microfiche at Whitby Public Library: Please see 349.71356 Whi in the microform cabinets.

Council Minutes and By-laws are available on self service microfilm at the Archives of Ontario: MS 800 Reels 1-9

Council Minutes and By-laws may be closed for conservation purposes. Please contact the archivist for more information.

Copyright held by creator. There are no restrictions on reproduction. If you wish to publish any of this material, please contact the archivist.

See finding aid for information on viewing these records.