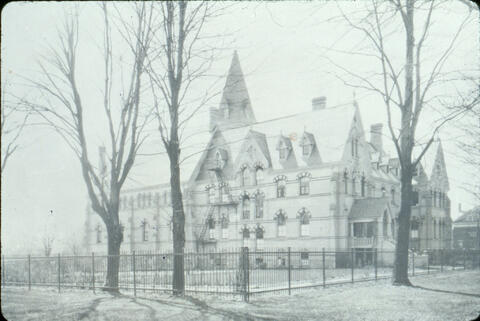 Congregation of the Sisters of St. Joseph in Canada

Mount Hope was the first Catholic institution in the Diocese of London to offer refuge and a home for the sick, infirm, destitute, and forsaken. The property that was originally the Barker House, was purchased by Bishop John Walsh and opened in 1869 as a Motherhouse and orphanage for the Sisters of St. Joseph. By 1870, the number of orphans living at Mount Hope grew. The elderly also moved to Mount Hope from Victoria Hospital and the Municipal Home for the Aged. The residents helped with domestic duties, gardening and other tasks. In 1877, the original building was extended and renamed Mount Hope Mother House, Orphanage and Home for the Aged. The only source of revenue were the salaries earned by Sister teachers and donations. By the late 1890s, Mount Hope became overcrowded. For health reasons, the orphans were moved to a new location and the elderly stayed at Mount Hope which was then renamed House of Providence. In 1951, St. Mary’s Hospital was built on one side, and in 1966, Marian Villa was built on the other side. The elderly were moved from the House of Providence to Marian Villa over time. In 1980, the House of Providence was demolished.

Series contains correspondence, deeds, photographs, and newspaper articles about Mount Hope Motherhouse in London, Ontario before its purchase and while it was operating. Earliest records include a report card from 1868, a letter dated 1869, and an original deed of land dated 1883. Records from the late 1920s to 1960s include original newsclippings. Many of the records are undated photographs, photocopies, or typed histories and biographies. The latest record dated 2005 is email correspondence.

The records are stored off-site in London, Ontario.

The Archives reserves the right to restrict access to the collection depending on the condition of the archival material, the amount of material requested, and the purpose of the research. The use of certain materials may also be restricted for reasons of privacy or sensitivity, or under a donor agreement. Access restrictions will be applied equally to all researchers and reviewed periodically. No researcher will be given access to any materials that contain a personal information bank such as donor agreements or personnel records, or to other proprietary information such as appraisals, insurance valuations, or condition reports.

Permission to study archival records does not extend to publication or display rights. The researcher must request this permission in writing from the Archives.