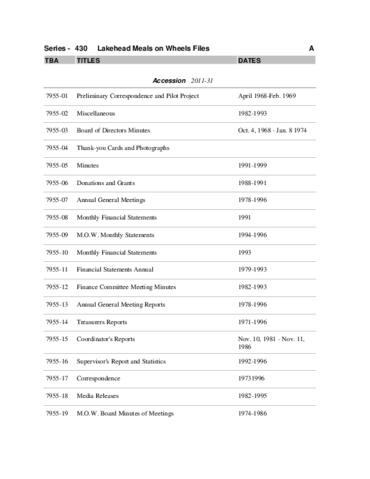 1.2 m. Primarily textual material, with some bound volumes and one videocassette.

These files were transferred to the City of Thunder Bay Archives under series CS412.

Meals on Wheels serving the City of Thunder Bay began in 1968, through work by the Lakehead Social Planning Council. A Steering Committee was assembled representing community groups and administration from the Cities of Port Arthur and Fort William. The
initial pilot project was deemed a success, and in 1969 an Action Committee of twelve volunteers was assembled, which quickly became a Board of Directors. The organization was incorporated as Lakehead Meals on Wheels Inc. in 1974.

A first full-time staff member was hired in 1973, with funding from the City of Thunder Bay and the Ontario Ministry of Community and Social Services, with more workers added in the following decades. Administrative costs were jointly funded by the City and the Province, and through the 1990s the Board worked to clarify the roles of these different organizations. A policy study released in 1992 led to the transformation of the Incorporated Board to an Advisory Board, with administration of Meals On Wheels clearly based in the City of Thunder Bay’s Homes for the Aged.

These files have been significantly arranged.