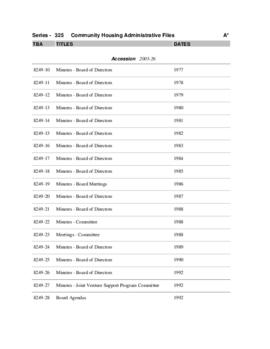 The Thunder Bay Community Housing department's mandate is to develop, build, and operate affordable rental housing for modest income families, seniors, single people or for those individuals identified as having special housing requirements in Thunder Bay.

Largely, the Community Housing Administrative Files series consists of Minutes, Agendas, and Administrative Report Summaries from the Board of Directors monthly and annual meetings. These meetings summarize the status of the Thunder Bay Community Housing department’s finances outlining schedules of income and expenses; the building, equipment, and grounds maintenance of the facilities and status of individual projects; and Reports for Information conveying other information concerning the operation of the department (Tenant Move-Outs/Vacancies, correspondence, ONPHA, etc.)

The Thunder Bay Community Housing department has kept detailed annual Financial Statements that summarize the activities of facilities for the given years. For a more in-depth perspective audit reports are available for specific facilities. And a number of files of correspondence have been preserved, particularly correspondence with the Board of Directors, Ministry of Housing, and the Canada Mortgage and Housing Corporation. 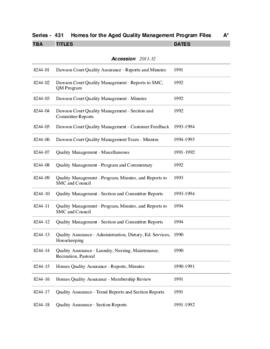 Quality Management / Quality Assurance programs are run in a coordinated fashion in all operating Homes. Some files relate only to a particular location while some deal with policy across all.

Most notably, the Quality Management program and program revisions are being preserved. The program details the mandate for the Homes for the Aged, and subsequently, the standards for specific sections (Administration, Dietary Services, Housekeeping, Laundry, Nursing, Maintenance, Recreational, Pastoral). Similarly, a number of sectional Quality Assurance handbooks are being preserved.

Additionally, there are minutes, agendas, and reports that reflect the committee work being conducted to maintain quality in the homes (e.g. Medical Advisory Committee or the Health and Safety Committee), and a number of focus group activities produced completed surveys and questionnaires that show tenants’ satisfaction with the services provided at Thunder Bay’s Homes for the Aged. 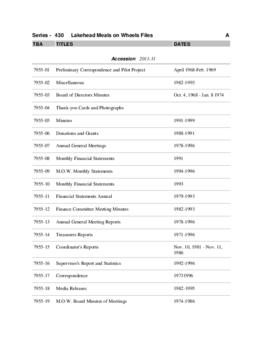 Meals on Wheels serving the City of Thunder Bay began in 1968, through work by the Lakehead Social Planning Council. A Steering Committee was assembled representing community groups and administration from the Cities of Port Arthur and Fort William. The
initial pilot project was deemed a success, and in 1969 an Action Committee of twelve volunteers was assembled, which quickly became a Board of Directors. The organization was incorporated as Lakehead Meals on Wheels Inc. in 1974.

A first full-time staff member was hired in 1973, with funding from the City of Thunder Bay and the Ontario Ministry of Community and Social Services, with more workers added in the following decades. Administrative costs were jointly funded by the City and the Province, and through the 1990s the Board worked to clarify the roles of these different organizations. A policy study released in 1992 led to the transformation of the Incorporated Board to an Advisory Board, with administration of Meals On Wheels clearly based in the City of Thunder Bay’s Homes for the Aged.