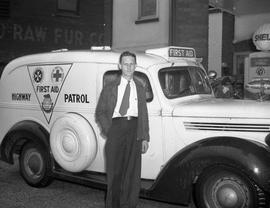 One image of Percy Schreiber, ambulance driver, standing in front of a highway patrol ambulance, which was parked in front of a Shell Gas Station in Sudbury, Ontario. 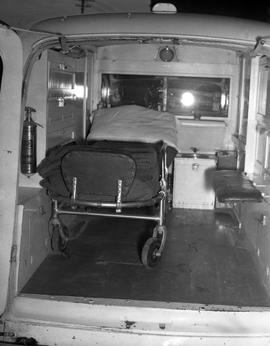 One image of the interior of a highway patrol ambulance in Sudbury, Ontario.

Fonds consists of financial and organizational records of the Abbeyfield Housing Society of Shanty Bay, who were responsible for the construction and early operation of O'Brien House, a retirement home.

Sub-series consists of monthly summaries of accounts payable by the TGH, in the form of itemized lists of outstanding accounts showing name of creditor, amount owed and nature of the debt (i.e. “pay rolls”, “elevator licenses” etc.).

Sub-series consists of legislative bills and acts pertaining to the Toronto General Hospital, and by-laws adopted by the TGH Board of trustees and sanctioned by the Provincial Lieutenant-Governor in Council.

Sub-series consists of minutes of clinic staff meetings, policy statements and medical notes issued by clinic administrators for the direction of staff in providing treatment and complying with Ontario Department of Health regulations and procedures concerning the reporting and treatment of venereal disease cases, correspondence of the Director of the Clinic, and statistics compiled by the Clinic documenting the volume and type of treatment provided.

This sub-series consists of documents relating to the administration of the TWH Auxiliary including its constitution and bylaws and lists of executive officers.

The series has one subseries:
13A) Inpatient Care Subcommittee minutes

Sub-series consists of minutes of meetings and related correspondence, reports and other materials distributed and considered at meetings.

Sub-series contains a 10% sample of the records of students from affiliated schools of nursing who attended the Atkinson School of Nursing of the Toronto Western Hospital to receive a specialized course of instruction or to complete professional training in nursing service in the nursing department of the Toronto Western Hospital 1935-1973. File 1.2.1.6.1 includes monthly ratings of student nurses in the Operating Room, as well as miscellaneous correspondence such as letters of recommendation, and applications for post-graduate training. It is likely that these records are of a post-graduate training course in Operating Room techniques.

Series consists of minutes of the Ambulatory Care Committee of the Medical Advisory Committee. Minutes of the Ambulatory Care Committee had been kept in two separate binders, within which minutes were filed in reverse chronological order. The files have been arranged chronologically by date. File SF2: 2.55 has an agenda and supporting material only, no minutes.

Series consists of minutes from the Ambulatory Care Committee and its various subcommittees and/or related committees. Series also includes copies of presentations given to the Committee by various departments within the hospital.

The first Annual General Meeting for the University Health Network occurred on September 15th, 1999. Series includes the contents of a binder labeled “Annual General Meeting Minutes Jun 1947-2005”. This binder included minutes of the University Health Network’s Annual General Meetings (1999-2005) as well as the minutes of the Annual Meetings of the Subscribers of its predecessor corporations The Toronto Hospital (1987-1998) and the Toronto General Hospital (1947-1986). The original purpose of these meetings was to elect Trustees. The annual meeting was extended to several meetings in 1947 and 1949 due to a lack of nominations. Minutes from September 17, 1997 are missing. Most minutes are signed originals.

University Health Network. Board of Trustees

Reports contain general information pertinent to the administration of the School, including statistics re: staff, applicants, admissions, and graduations; developments in the School’s curriculum and facilities; scholarships and awards; and information about staff appointments.

Annual Meeting of OCI Members of the Board

Subseries consists of five Board Books from the Annual Meetings of the OCI Members from July 1992 to June 1996.

This sub-series consists of annual reports comprising a statistical summary of hospital facilities and services, prepared for various agencies of the Ontario and federal governments, including the Ontario Department/ Ministry of Health, the Ontario Hospital Services Commission, and the Dominion Bureau of Statistics - Department of National Health and Welfare. These reports were mandated by law and used to determine the level of government funding allocated to the Hospital. This sub-series is missing the report for 1956.

Sub-series consists of annual reports prepared and published by the Director of the Ontario Institute of Radiotherapy. Reports summarize the work of the Institute in the year preceding and include information about Institute staff, financial statements, research reports and statistics outlining the volume of patient admissions and treatments.

Sub-series consists of annual reports prepared and published by the Board of Trustees. Reports contain such information as lists of administrative and medical staff; statistics and/or departmental reports illustrating major hospital functions, services and activities; summary reports by the chairman of the Board of Trustees, the hospital’s chief executive officer, and the Director of the TGH School of Nursing; annual financial statements outlining the hospital’s revenues and expenses; photographs and illustrations depicting hospital buildings, facilities, services and staff.

Toronto General Hospital. Board of Trustees