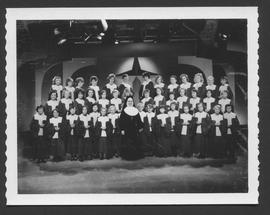 This series contains records related to general roles and duties that Sisters held in their ministries. There are also records concerning specific professional roles, including homemaker, nurse, music teacher and teacher. Records take the form of handwritten and typed notes on the ministries performed by individual sisters in 1999, and lists of sisters that performed specific roles in the congregation.

The fonds consists of yearbooks, photographs, newsclippings, a guestbook, an alumnae association booklet containing the constitution and bylaws, a pledge, photo albums and a diploma. The fonds also contains two large, matted photographs of graduating classes, a nursing kit, a crest and a nursing diploma.

This sous-fonds contains materials related to the activities of the St. Joseph's School of Music, including rosters of staff and students, music festival results, sheet music, photographs and scrapbooks.

The sous-fonds contains photographs, newspaper clippings, correspondence, programs, reports, and sound recordings of performances. It also contains information about students and teachers (both Sisters and lay teachers), award winners, and alumni. It has material about the administrative activities of the Academy, its history, including the opening, closing graduations and yearbooks, notable groups such as the Academy Singers, and correspondence with the Ministry of Education of Ontario. The sous-fonds also contains memorabilia saved by Sister Jean Moylan, a former student and teacher at the Academy, and Lee Anne Doyle, a former student at the Academy.