Fonds consists of six scrapbooks pertaining to the 1957-58 season for the Whitby Dunlops hockey team. Scrapbooks contain newspaper clippings, magazine articles, and some handwritten observations by Ken. Scrapbook five follows the team's 1958 trip to Oslo, Norway to compete in the World Ice Hockey Championship which they go on to would win. Each scrapbook contains a table of contents at the beginning.

Collection consists of memorabilia and material pertaining primarily to the activities of the Whitby Dunlops during the team's active years from 1957 to 1959. There is also material which relates to anniversaries and other events in the years following the team's dissolution in 1960. Collection is comprised of 8 series including: Programs, Publications, Ephemera and artifacts, Team information, Events, Diary of Kay Irwin, Postcards and photographs, and Video. 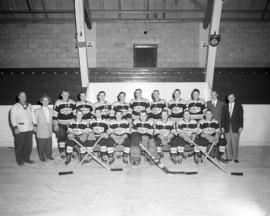