The item is one copy of multiple duplicate albums created by the Aerospace Engineering Test Establishment (AETE) to commemorate its project to break the altitude record in 1967. The Canadian record was set by Wing Commander R.A. White in the CF-104 Starfighter 12700 at the Canadian Forces Base Uplands in Ottawa. The aircraft reached 100,110 feet. The album consists of black and white photographs or photo composites showing the CF-104, White, the ground crew and other personnel preparing for the flight and after its successful completion. The documents are copies of letters of congratulations to White from the Minister of National Defense and the Chief of the Defense Staff, as well as a memorandum from the Chief of the Defense Staff to the Commander of the AETE. The diagrams are copies showing the flight profile, the climb angle, and the altitude over time. The album has a hand-written dedication to Joe by R.A. White written on its first page.

Item consists of a photograph album containing prints relating to the British military garrison at London, Ontario in the late 1860s. 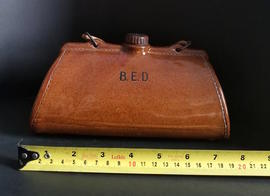 Item is a ceramic bed warmer or foot warmer. Originally, bed warmers used hot coals from a fire to warm the bed before use. This example, however, could stay in the bed as the user slept and would be filled with hot water.

The warmer is designed to replicate a small Gladstone bag and features faux stitching patterns along the seams. The original handle has been replaced with a leather tie, but the item still has the original wooden stopper. 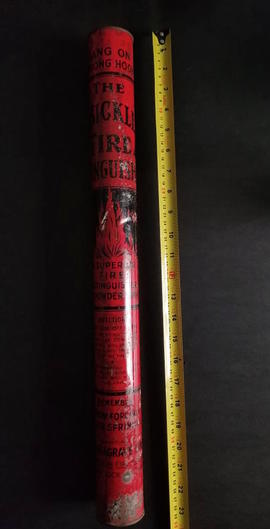 Item is one tin fire extinguisher. It was filled with sodium bicarbonate which would be thrown onto the base of a fire to smother it.

The item is a report in the form of a scrapbook where narrative reporting has been typed directly on the page and maps and photographs have been glued to the pages. A Senior Air Officer requested Beard to write this report on his voyage on the Hudson Bay Company ship Nascopie in July 1935. In his introduction, Beard wrote “My opinions are naturally of limited value, as no opportunity presented itself for me to have actual flying experience…. I have therefore endeavoured to view matters as if I was to be a passenger in an aircraft, contemplating a flight to the areas mentioned, and that the pilot was dependent on me for advice as to details, or contingencies likely to be experienced.” Among the photographs, at least 6 are aerial photographs – the remaining photographs appear to have been taken during Beard’s voyage on the Nascopie. Most maps are hand traced in black ink with colour highlights. Photograph captions and the cover title are also handwritten in black ink. 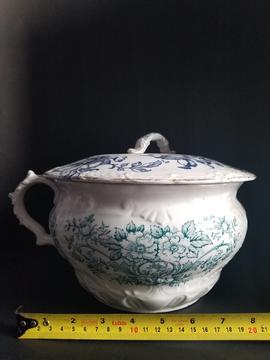 Item is one chamber pot, or portable toilet, with lid and handle. Produced by Dudson Wilcox & Till Ltd. It features embossing and the floral "clio" print from their range of transferware patterns. The pot itself has a green design, whereas the design on the lid is in dark blue and the floral pattern differs slightly. This may suggests the lid is not the original.

Chamber pots were often kept under a bed or in a nightstand. They remained a common household item until the mid twentieth century, but variations of the chamber pot are still in use today. 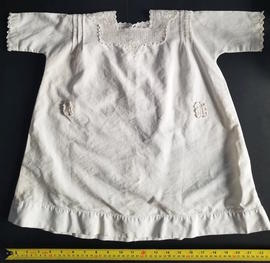 Item is one machine sewn child's dress. It features lace detailing on the collar and sleeves. 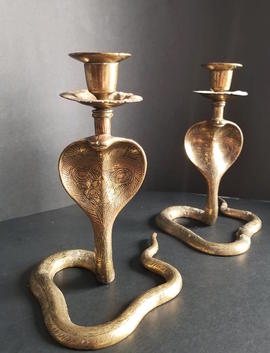 Item is a matching set of cobra shaped candlesticks. They are engraved with geometric and floral designs.

Item is a teacup with matching saucer. They are hand decorated in the Windsor Derby pattern from Thomas Hughes & Sons Ltd. The art deco design features floral motifs in reds greens and blues, as well as detailing with 24K gold. It was manufactured in England and distributed through Cameron & Sons Ltd. in Toronto.

Map is a reproduction of a ca. 1851 map detailing patents of Crown land. The area is labeled King’s Mill Reserve and details the areas of the Humber Valley and Etobicoke. Notably, it showcases and labels the various taverns and mills along the river. King’s Mill was established by John Graves Simcoe in 1793 to be used as a timber supplier for the British Government. The names inscribed on the map correspond to the area of land the individual has a patent to. These plans were often used to document sales and grants on the land. However, patentees listed on the plans produced pre-confederation, like this example, would often forgo actually following through with the patent process, so multiple sources should be consulted to confirm the patents of the land. 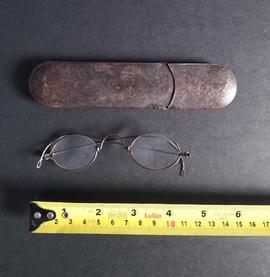 Item is a pair of mid 19th century eyeglasses with a simple metal wire frame. Their original case is also included.

The item is a scrapbook containing documents and identification ribbons from the First Canadian Television Clinic, presented by the Academy of Radio Arts. The documents in the scrapbook include the brochure for the event, an open invitation letter, the agenda, and biographies on some of the speakers. The three ribbons are for identifying whether a person was event staff, a guest or a member of the press. 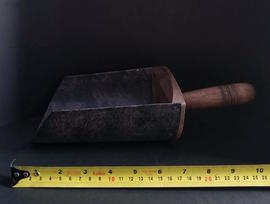 Item is a flour scoop with a wooden handle. It is marked with the number 3 under the handle. 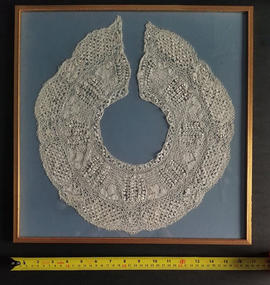 The item is a handmade fine lace collar that features a Maltese cross pattern. It is laid flat in a gold gilt frame. A handwritten note attached to the back of the frame identifies it as being produced in Nottingham England, and brought to Canada sometime in 1915.

Photograph depicts a side view of the Howland family residence in Lambton Mills. The home, designed by William Tyrell of Weston and built around 1860, was set back behind the Lambton Hotel with the entrance drive running between the general store and the hotel. It is believed to have been used by Peleg and/or Frederick Aiken Howland during its life. In 1928, the home was demolished and its foundation filled to make way for the approach of the high level bridge on Dundas Street crossing the Humber River.

Lambton was born in 1792 in present-day Westminster. First elected to British parliament in 1813, Lambton served until 1833 and helped draft the Reform Bill of 1832. Following his resignation, he was raised to the house of lords, becoming Viscount Lambton and Earl of Durham. On May 29th, 1838, Lambton arrived in Upper Canada, in the role of Governor General and High Commissioner to British North America. He was tasked with the responsibility of preparing a report on the Canadian Rebellions of 1837. His famous "Report on the Affairs of British North America", sometimes referred to as the Durham Report, was released to mixed reviews a year later, in Jan. 1839. The result of the report was the union of Upper and Lower Canada into a single colony. Lambton's work in Canada also was instrumental in paving the way for responsible government.

William Pearce Howland was so impressed by Lambton that he named Lambton Mills, formerly Cooper's Mills, after him around 1850. The two men most likely never met.

Item is the letters patent for the King George Home and School Association. The certificate matte lists the names of individuals active in the organisation at the time.

Photograph is a 1922 class photo from Lambton Mills Public School in Toronto, Ontario.

Item consists of an interview with Mabel Harvey conducted by an individual who is believed to be a student of Warren Park Public School. The interview focuses on Harvey's experiences living in Warren Park and the Humber valley. 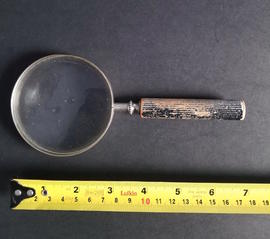 Item is a magnifying glass with a painted wood handle. The maker's marks on the top of the metal frame for Bausch & Lomb Co. suggests a date earlier than 1908 when the company merged with Zeiss & Saegmuller and began using B. L. Z. S. as their trademark.