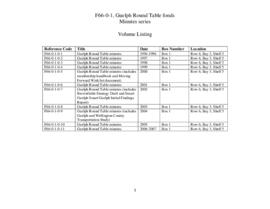 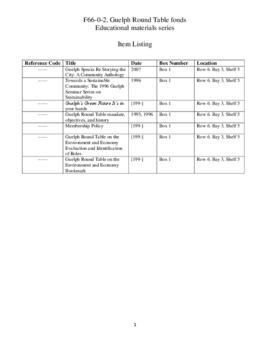 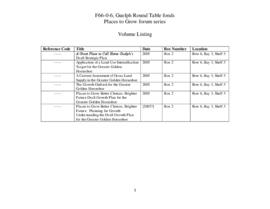 The Guelph Round Table was established in 1988 as a grassroots organization. Their objectives included promoting environmental sustainability in the community and to act as a forum for community engagement and dialogue. Consisting of a board range of members from business, government, and education they worked to raise awareness on environmental concerns, facilitate discussion, champion individuals who were taking action on environmental issues, and transmit information to various stakeholders.

Since its inception the Guelph Round Table has participated in a number of initiatives such as the Guelph Green Plan, Hanlon Creek Watershed Study, two seminar series on sustainability that resulted in published works, and the River Systems Advisory Committee. In 1992 the Guelph Round Table was designated by the City of Guelph to develop Guelph’s Green Plan. This document set out environmental principles to help guide the City’s planning. The group was also involved in helping to deal with such issues as pesticide spraying and food packaging. The group has since disbanded.

Prior to their transfer to the Guelph Public Library Archives the records were in the custody of Mike Driscoll.

Fonds consists of minutes, correspondence, educational materials, financial reports, and studies created and or accumulated by the Guelph Round Table in the course of their business activities.

See series descriptions for more details on available listings for these records.