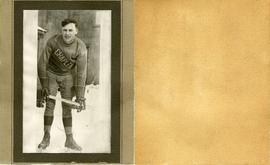 Eva Wolotko was born in November 1903 to parents Anton Wolotko and Mary Fox Wolotko in Chapleau, Ontario. Wolotko had one brother, Joseph Wolotko (October 1910 - December 12, 1949, AKA Joe Wolotko), who played hockey for teams in Chapleau and Falconbridge, Ontario in the Nickel Belt League. In 1938 Eva Wolotko moved to Sudbury, Ontario and in 1940 she married Earle Cram (aka Erle C. Cram, Ernie Cram, 1907-1964), a firefighter and former lumber and construction worker. The marriage ceremony occurred in Wolotko's hometown of Chapleau but the couple lived in Sudbury. Eva Wolotko Cram had a career as a dressmaker and later as a school crossing guard. She belonged to St. Andrew the Apostle Roman Catholic Church and died on September 26, 1987 at the age of 83.

The fonds consists of one photograph and two composite photographs of hockey players and lacrosse players in Chapleau, Ontario and Falconbridge, Ontario.