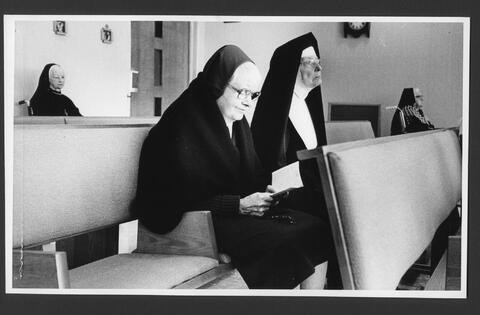 Congregation of the Sisters of St. Joseph in Canada

As a congregation, there is a significant focus placed on community liturgy and both independent and guided prayer. Prayer is central to the Sisters’ lives of quietude and contemplation — a means to meet God in silence and contemplate the ways in which one has encountered him in their daily interactions. Prayer is not only performed independently, but collectively through daily celebration of the Eucharist (also referred to as Mass). A broader example of community prayer and celebration is performed before or during major events — a type of prayer known as indulgences. While the historical roots of indulgence run deep, in the modern day these prayers are said as a means of giving special attention and gathering community efforts as communicated by the Vatican. They serve as an act of bestowing goodwill and blessing during new, unfamiliar, or trying times. While prayer and quiet contemplation are central to the lives of the Sisters, public service and maintaining a strong bond within the communities they live in is also of great importance. Along with providing service to the people in their community, the Sisters produced booklets and newsletters as means to share their reflections and particular focuses within the community, and practice solidarity in faith and worship more generally.

The series contains booklets, information sheets, and newsletters related to Catholic prayer, rituals, and services in both independent and guided forms.

The records were transferred to the archives by the administration.

The records are stored off-site in London, Ontario.

The Archives reserves the right to restrict access to the collection depending on the condition of the archival material, the amount of material requested, and the purpose of the research. The use of certain materials may also be restricted for reasons of privacy or sensitivity, or under a donor agreement. Access restrictions will be applied equally to all researchers and reviewed periodically. No researcher will be given access to any materials that contain a personal information bank such as donor agreements or personnel records, or to other proprietary information such as appraisals, insurance valuations, or condition reports.

Permission to study archival records does not extend to publication or display rights. The researcher must request this permission in writing from the Archives.