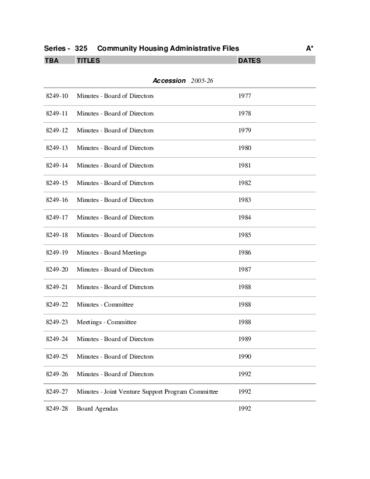 These records were scheduled as OS007 and OS011 Community Housing division of the District of Thunder Bay Social Services Administrative Board. They were maintained in the DSSAB division and then transferred to the City of Thunder Bay records centre for inactive storage as per their retention schedule.

The Thunder Bay Community Housing department's mandate is to develop, build, and operate affordable rental housing for modest income families, seniors, single people or for those individuals identified as having special housing requirements in Thunder Bay.

Largely, the Community Housing Administrative Files series consists of Minutes, Agendas, and Administrative Report Summaries from the Board of Directors monthly and annual meetings. These meetings summarize the status of the Thunder Bay Community Housing department’s finances outlining schedules of income and expenses; the building, equipment, and grounds maintenance of the facilities and status of individual projects; and Reports for Information conveying other information concerning the operation of the department (Tenant Move-Outs/Vacancies, correspondence, ONPHA, etc.)

The Thunder Bay Community Housing department has kept detailed annual Financial Statements that summarize the activities of facilities for the given years. For a more in-depth perspective audit reports are available for specific facilities. And a number of files of correspondence have been preserved, particularly correspondence with the Board of Directors, Ministry of Housing, and the Canada Mortgage and Housing Corporation.

Files arranged by subject and then chronological.

A* - May be restrictions on access for some files.