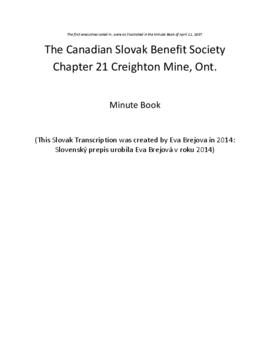 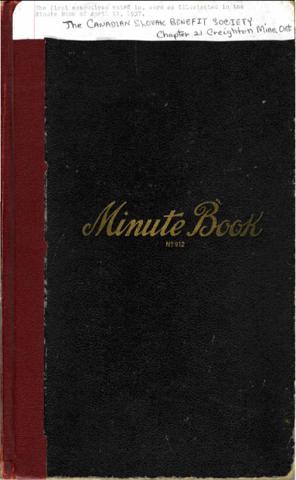 Item consists of one bound, handwritten volume of the minutes of the proceedings of Branch 21 of the Canadian Slovak Benefit Society (C.S.B.S.). Outlined in the minutes is the regular business of Branch 21, including the collecting of dues and monetary donations for the C.S.B.S.; discussing and voting on which members in need of financial aid would receive it and if any members were in need of a sick-bed visit or flowers, and the planning of fundraising events such as banquets, dances, bazaars, New Year's Eve parties, Mardi Gras parties, picnics and concerts. The minutes also discuss Branch 21's involvement in the purchase of the Slovak National Hall at 28 Alder Street in Sudbury, Ontario in 1938 along with their fundraisers and collection of donations to establish the hall as a place for Slovak's to gather, socialize and hold C.S.B.S. meetings. Other local Slovak-Canadian events mentioned include political support by the group in 1939 behind Dr. Edvard Benes, leader of the Czechoslovak independence movement and 2nd President of Czechoslovakia; the Canadian Slovak Benefit Society Convention; charitable donations to other branches of the C.S.B.S. or local families in need and the vote for the new executive committee, which included a Chairman, Secretary, Treasurer and Entertainment Committee.

Both a typed transcript in Slovak and an English translation of the minute book is available.