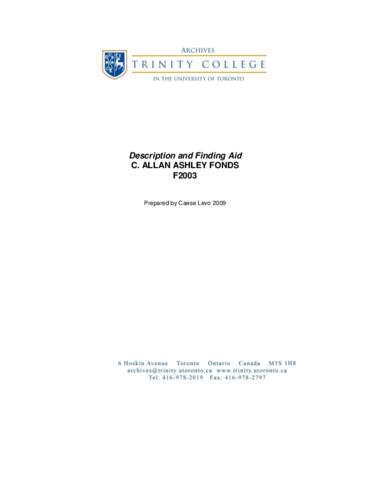 1.04 m of textual and other records

Charles Allan Ashley, educator, soldier, and accountant, was born on 21 December 1894 in Willenhall, England, and died on 10 July 1974 at Innsbruck, Austria. He was the son of Samuel Joseph Ashley, a schoolmaster, and Elizabeth Cumming Ashley. He began school in Birmingham and in 1912 articled as a chartered accountant. In 1914 he enlisted in the 2nd Birmingham City Battalion of the Warwickshire Regiment and then transferred to the Royal Engineers, Special Company 189, in July 1915. He saw action at Bethune, Philosophe, Vimy Ridge, and the 3rd Battle of Ypres. He became acting company commander, was mentioned in dispatches, and was wounded. After the war he attended the University of Birmingham, obtaining a B.Comm. in 1921, and he was admitted as a chartered accountant in 1922.

The fonds consists of writings, including memoirs, plays, and academic papers; materials relating to Trinity College and the University of Toronto; correspondence; printed materials; financial records; the records of the executor; and photographs of friends, family and travels.

George Shepherd, executor of the estate of C. Allan Ashley.

Archivist has arranged the materials into series.

Various copyright holders. It is the researcher's responsibility to obtain permission to publish any part of the fonds.